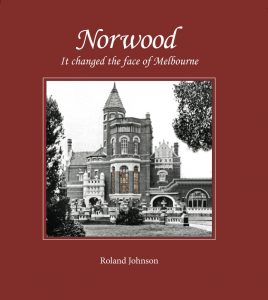 On investigating Norwood’s  history he has found many surprises about its colourful past, and its connections with ‘Marvellous Melbourne’.

From John Fawkner’s party landing on the Yarra in 1835, Melbourne had 55 years of rarely interrupted prosperity. It had come so easily few believed it would end.

But it did end.  Just as financier, philanthropist and sportsman Mark Moss was building his testament to his and the city’s success. —Norwood.

This is a story of that house, it’s history and its people. But it is also more than that. This is a history of the settlement of Victoria and the rich background to the early formation of Melbourne.

An explosion of advanced cultural and political developments followed on from a remarkable gold rush and its rebellion to a city, with impressive boulevards, beautiful parks, palatial public and commercial buildings and opulent homes, like Norwood.

Weaving the history of Norwood and its people with the story of Melbourne this is a rare insight into some of the people and events that shaped the early settlement and the growth of Victoria.

In particular, it follows the story of Mark Moss and his building of Norwood –often referred to as Moss’s folly – at the height of the boom. By tracing the evolution of the city of Melbourne through property acquisition, speculation and development cycles through to the mid 1900’s much is revealed. Including the influence of Norwood in the creation of the National Trust (Victoria).

Lavishly illustrated in full-colour. 184 pages, $22.95 plus postage. Contact us to order your copy.